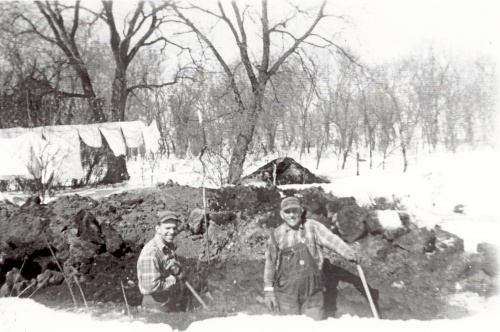 My Grandpa and my Dad digging the basement for our home, about 1948.

“No matter who gets elected,” my grandpa used to say, “we’ll still be shoveling shit and hollering whoa.” He didn’t believe politicians would do much to change his life for the better, but he did believe he and his family would keep on going.

Grandpa and Grandma, Henry and Mary Turck, lived through the 1918 flu and the Great Depression. Though they both survived 1918, one of Grandpa’s older sisters was among the 600,000 people who died of that flu in the United States. The 1918 flu killed somewhere between one and two million people worldwide, more than one percent of the world’s population at the time.

In 1918, Grandpa was 25 years old, farming on the home place. He and Grandma had not yet met one another. Grandma turned 20 that year, teaching in a one-room country school. A few years later, they married and settled on the farm. One of Grandma’s letters describes daily life on the farm:

“We are all fine here and hard at work. I just canned up six quarts of grape and apple jelly today besides pulled a few beans. So you see we have jell and beans this winter anyway.

“Henry is hauling gravel again. He gets $5.50 a day so that isn’t half bad. He is home for dinner and goes by with each load so it doesn’t seem so lonely as when he used to be gone all day.

“Crops are good around here with the exception of corn and the frost came too quick for it but still it will make feed.”

Grandma and Grandma milked cows every morning and every night, 365 days of every year. After milking, he cleaned the barn, shoveling out manure. He drove a team of horses, plowing fields, planting, cultivating, harvesting, and driving the manure spreader out to fertilize the fields.

By the time the Great Depression hit, they had their first child (my father) and a mortgage to pay. FDR’s Works Progress Administration paid for road grading, so Grandpa hitched up the team of horses and went out to make enough money to pay the mortgage and keep the farm.

Living through tough times, they held onto family and faith and love and laughter. I’m still trying to hold on and follow their example. As the tweets and lies pile higher and deeper, and as the country careens down a rough road like a runaway team of horses, I’m going to keep on shoveling shit and hollering whoa.

[Thanks to my brother Kevin for reminding me of Grandpa’s saying, and to my mother for remembering the context.]